The Seventh Annual National Youth Arts Award  announced the winners for the 2011-2012 season .  Carlsbad High School earned 6 awards and 6 additional nominations for it's production of Phantom of the Opera.  Our pit musicians won the Youth Orchestra Award.  Elan McMahan received an award for Musical Direction.

The Wind Symphony earned it's 12th consecutive unanimous superior at the El Camino Festival on March 8, 2012.  Way to go! Here's a link to the performance.

Sal DeBlasi of Carlsbad decided to donate his wife Silva DeBlasi's piano to Carlsbad High School as a memorial to her. Silvia's picture is to the left. JAMIE SCOTT LYTLE | [email protected]

After his wife died in April, Sal DeBlasi wanted to do something with her piano that would help the public and memorialize her.

He decided to donate it to Carlsbad High School for students and teachers to play in the band room.

The 89-year-old originally wanted to give the 1990 Kawai upright piano to a business group working to install a public piano at the downtown Coaster station.

However, Don Chiristiansen, who first brought up the station idea, said that he thought the instrument was too nice to go outside and recommended he give it instead to the high school, where students and teachers will move into new classrooms when they return to school Jan. 9.

"It's a really nice piano," he said. "I just thought it was better suited for something other than being outside."

Christiansen said he has gotten six other offers to donate pianos for the train station. One could be in place as soon as spring.

At Carlsbad High, the new piano will be a big upgrade for the band and will allow it to use its older one in a practice room, said Marina Hall, who leads the orchestra at the school.

Band students often play the piano when they get free time, she said.

DeBlasi lives in the Carlsbad by the Sea retirement community. His wife, Sylvia, was interested in music her whole life, he said, attending a prestigious arts school as a teenager in New York City.

The school plans to put a plaque on the piano as a memorial, thanking the DeBlasis for the donation, Hall said.

It feels good to know that the piano will have a good home and will be useful for students for years, DeBlasi said, especially in light of recent money woes for schools across the state.

Carlsbad Unified School District is bracing for an estimated deficit of nearly $8 million in next year's budget if the money coming in from property taxes and from the state doesn't grow.

"This is the time for people to donate things to schools," DeBlasi said. "It's serving a very useful purpose at a time when the economy is going down the sewer."

Marching Lancers take 4th at the SCSBOA 4A Championships

Congratulations to the Marching Lancers, Greg Anderson, and all the coaches for the 4th place finish at the SCSBOA Championships.  Warren High School in Downey hosted the competition on Saturday, December 3, 2011.  The Marching Lancers moved up to 4A this year after experiencing a surge in membership.  They grew from 89 to 126. Great job especially with so many new members. (Click here to watch the Marching Lancers perform Sahara Storm at the Poway Invitational in October 2011.)

Kaili Masamoto
CARLSBAD — When the 85th annual Macy’s Thanksgiving Parade in New York City airs on Nov. 24, San Diegans have an extra reason to celebrate the event. Carlsbad High School senior Kaili Masamoto will be representing Carlsbad at the Macy’s Great American Marching Band.Masamoto is among a select group of fellow high school musicians arriving from all over the nation to take part in one of the most popular parades in the country.Playing the flute, Masamoto, 16, will be joining 225 other band members who will lead the 3-mile parade route in New York City with 3 million to 3.5 million street spectators watching.“The Macy’s Thanksgiving Parade is one of America’s last surviving variety shows and it defies gravity with giant helium balloons flying through the air and celebrates American culture and heritage by celebrating the spirit of kids of all ages,” said Wesley Whatley, creative director for the Macy’s Parade and Entertainment Group.Whatley said that participation in Macy’s Great American Marching Band was “invitation only” and followed by a thorough application process review, which Masamoto passed.“We have a panel of college music professors who review the applications and pick members based on geography and the needs of the instrumentation for the group,” said Whatley, who added that the band members are from grades nine to 12. A list of musical accomplishments was also considered in the process.Masamoto has been part of the Carlsbad High School Band for four years. Above all, she was selected to play in the All-State High School Honor Band in 2011, which netted the attention of the Macy’s Parade people and started the Macy’s Great American Marching Band application process.The trip to New York was an out-of-pocket expense. A combination of funds made it possible for Masamoto to go. For starters, Masamoto, who has been a piano teacher since 2009, used her earnings to fund part of this once-in-a-lifetime experience.“I currently have seven piano students who are so much fun to teach,” she said, adding that she instructs out of her home. “It’s seriously the best job I could ask for because I’m getting paid to show other kids how to play music.”Masamoto’s mother, Dina Masamoto, said that her daughter also raised money through the Carlsbad High School Band Boosters’ fundraisers.In addition to achieving the All-State High School Honor Band, Masamoto’s other accolades include All-Southern California High School Honor Band in 2010 and 2011, All-Southern California Middle School Honor Band in 2008 and 2009, and All-State Middle School Honor Band in 2008.For Masamoto, snagging a spot in the recent All-State High School Honor Band was no small feat. “The flute is probably the most competitive instrument in those auditions, so it’s a pretty big deal for her to get in,” said Greg Anderson, band director at Carlsbad High School.Masamoto will be arriving to New York the weekend before Thanksgiving.“I’ve never been to New York and I’m looking forward to seeing it and being part of the Macy’s Thanksgiving Day Parade,” Masamoto said. Meeting all the other band players from across the nation, she said, is something else she’s really looking forward to.When the students arrive, they have a lot of work and preparation ahead of them. “We need to bring everyone together both in sound and visual marching,” Whatley said. “They spend about six to eight hours a day in rehearsals, which is generally split into morning and afternoon sessions.”The evenings, however, are strictly for fun. Supervised trips have been arranged for the musicians to visit popular New York sites and Broadway show performances.Although music will always be a part of Masamoto’s life, she said that she may not want to pursue it professionally as an adult career. But one thing is for sure, she’ll be playing for more than 50 million television viewers on Thanksgiving Day.
Solo & Ensemble Festival 2011

The CHS Winter Guard took 1st place in the Regional A Blue division at the WGASC championships on April 16, 2011 at Oceanview.  They came in with a score of 83.3 Our outstanding winter guard coach, Jackie Meza, continues to build a strong team of performers. 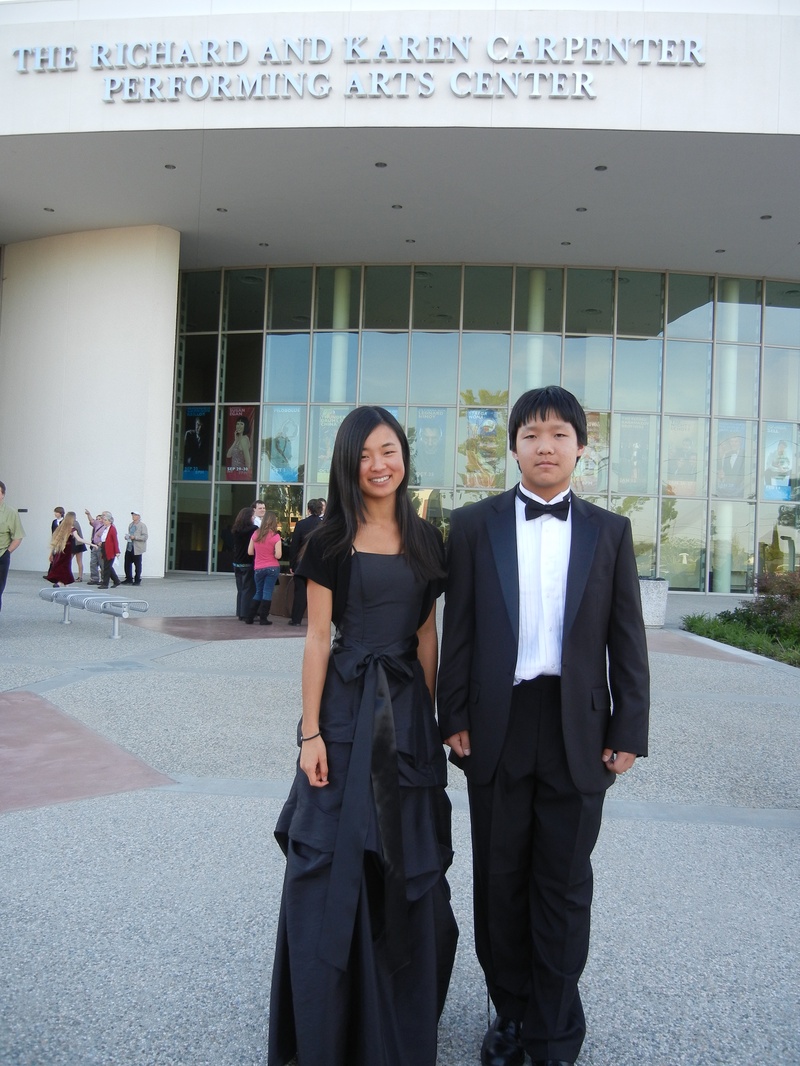 Congratulations to Kaili Masamoto (Flute) for also making the All-State High School Honor Band.  She performed at the Saroyan Theater in Fresno, CA in February 2011. 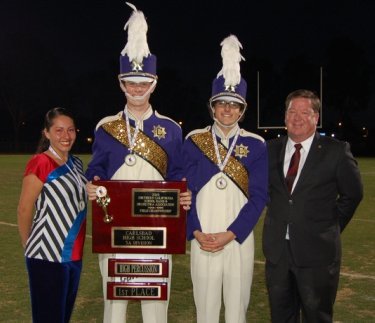 The Marching Lancers took first place at the SCSBOA 3A Championships in Bellflower, California on Saturday, December 4, 2010.  They were the number 2 seed out of 12 finalists earning a spot in the competition. The Lancers gave an outstanding performance to earn the Gold Medal for the second year in a row.  The Lancers also took the High Percussion Award. Congratulations to Mr. Greg Anderson, Director, Jackie Meza, Color Guard coach, and Mike Chavez, Percussion coach, and all the Marching Lancers.

(Click here to watch the Marching Lancers perform "Fast Track" at the Vista Invitational in November 2010.)

Under the direction of Jackie Meza, the CHS Winter Guard took the Silver Medal at the WGASC circuit championships on April 17, 2010.  For photos, click here. 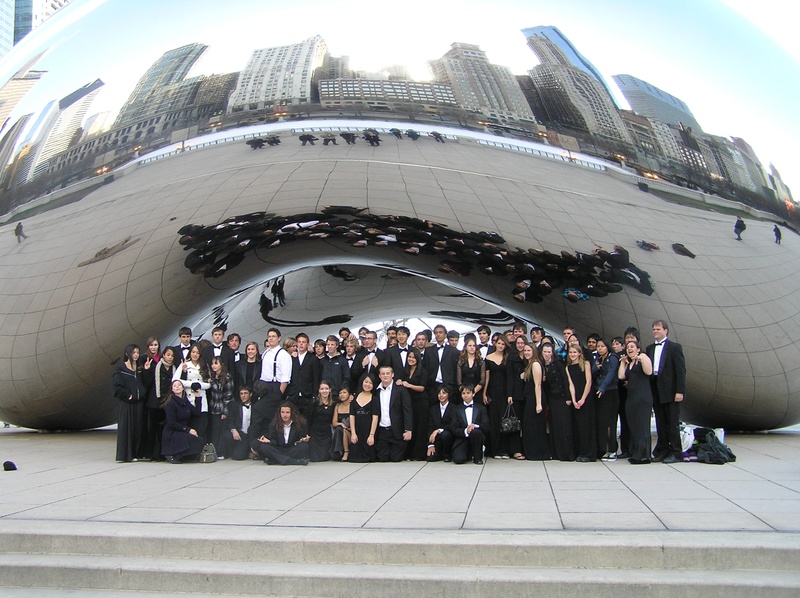 Carlsbad High School Marching Lancers competed in the SCSBOA 3A Field Championships on Saturday, December 5 at Eleanor Roosevelt High School in Corona.  CHS placed first out of 12 bands which traveled from all over Southern California.  All band and guard students received gold medals.  For a recap of the scores, visit http://www.scsboa.org/calendar_links/recaps/20092110/field/fullchamps.pdf.

Teams varied in size, from about 40 members to more than 150, such as Mission Viejo's squad.

Vista High will host its 28th annual invitational field tournament tomorrow. The event begins at 9 a.m. and runs into the night.

Schools from throughout the county will compete.

Tickets range from $7 to $12. For more information, go to vistaband.org.

The Sweeney Todd orchestra pit, under the direction of Elan McMahan, took home a John Raitt Award for Youth (JRay) at the spring 2009 awards banquet.  The competition included high school productions from all over Southern California.

The CHS Drumline traveled to Dayton, Ohio in April 2009 where they competed in the WGI World Percussion Championships.  They made it to the final round and took 7th out of 60 ensembles.  A fantastic achievement for Carlsbad High School's first national drumline competition!

Make a donation to the CHS Band Boosters